In the late 1960s, Sol LeWitt established a set of aesthetic principles through two key texts that would form the basis of his practice: “Paragraphs on Conceptual Art” (1967) and “Sentences on Conceptual Art” (1969). For LeWitt, “the idea or concept is the most important aspect of the work.” He began to use these ideas as guidelines for two-dimensional works drawn directly on the wall. LeWitt’s outlook and practice inaugurated a new genre that he would explore for the remainder of his career.

The wall drawings are the result of a set of instructions that are normally brief and relatively direct; consequently, their results vary in complexity and scale.  “Paragraphs on Conceptual Art” emphasized this level of preparedness. LeWitt asserted that “all of the planning and decisions are made beforehand and the execution is a perfunctory affair.” Although the earliest of these works were drawn by LeWitt, the series quickly grew into a form of visual score that could be better interpreted by a qualified assistant or group of assistants in a specific location.

Wall Drawing #1085: Drawing Series—Composite, Part I–IV, #1–24, A + B and Wall Drawing #1211: Drawing Series—Composite, Part I–IV, #1–24, A + B, installed in symmetrical galleries, are twin works conceived in 1968, but only materialized thirty-five years later at Dia:Beacon. In 2006 Dia invited LeWitt to select works for the adjacent galleries from among the numerous drawings that he conceived in the early 1970s. Despite LeWitt’s firm belief that planning and decisions should be done beforehand, he often capitalized on circumstance. The role of the assisting drafters could be as influential to the piece’s completion as the space itself. Sometimes the physical nature of the drafters, such as their height or arm length, are inevitably incorporated into the work, determining its appearance. Thus, these drawings are always unique, and a single generative principle opens the work to infinite variations.

When Sol LeWitt executed the first of his wall drawings in 1968, he inaugurated a new genre that he would explore for the next four decades. As with his sculptures and prints, the wall drawings are the result of a set of instructions carried out, in this case, directly on a chosen wall. Those instructions are normally brief and relatively simple—“ten thousand straight and ten thousand not straight lines”—and so their results vary in complexity and scale. The earliest of these works were drawn by LeWitt. But the series quickly evolved into a form of visual score, to be interpreted by a qualified assistant or group of assistants in a specific location, in perfect analogy with the tradition of musical composition and interpretation.

Despite LeWitt’s definition of the idea as the “machine that makes the work,” he often capitalized on circumstance, and the role of the assisting drafters could be as influential to the piece’s fabrication as the architectural quirks of its site. Sometimes the physical particularities of the drafters, such as their height or arm length, are inevitably transferred into the work, determining its appearance. In fact, LeWitt regarded his works as “musical scores,” in which the conceptual program that determines the composition, literally stated in the title, is always self-evident. “All decisions are made beforehand, so execution becomes a perfunctory affair,” he stated in his landmark credo, “Paragraphs on Conceptual Art” (1967), adding that “in conceptual art the idea or concept is the most important aspect of the work.”

The three variations on Wall Drawing #411: Isometric figure with progressively darker gradations of gray ink wash on each plane (1984 and 2003) explore possible geometric shapes within a designated ten-foot-square area of wall. In their imposing physical guise, LeWitt’s works reveal a compelling, luminous beauty that speaks as much to the senses as to the intellect. For even though the preset programs can be readily grasped, what is unexpected is their exhilarating presence. Experienced as a kind of aesthetic excess, this is the sensory equivalent of the works’ breathtaking logical consequence, a confrontation of what has been called “the purposelessness of purpose.” 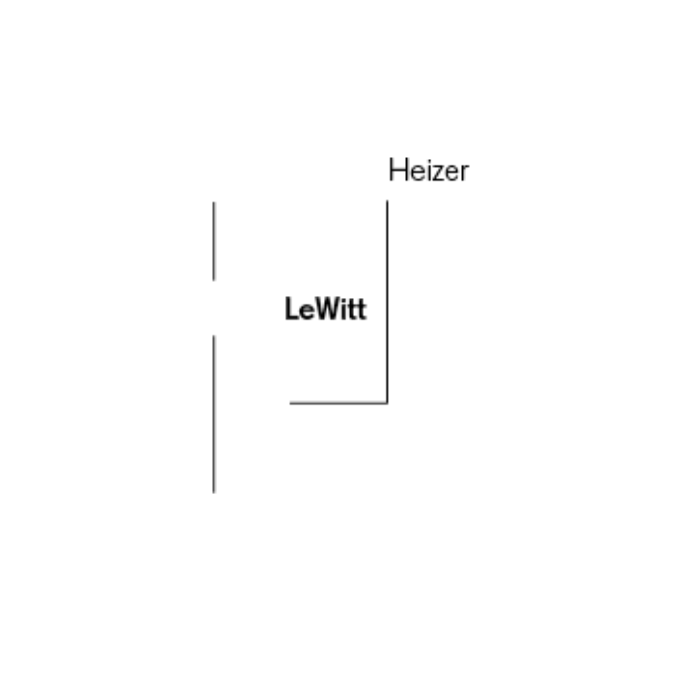 Sol LeWitt was born in Hartford, Connecticut, in 1928, and attended Syracuse University. After serving in the Korean War as a graphic artist, he moved in 1953 to New York, where he worked as a draftsman for the architect I. M. Pei. LeWitt had his first solo exhibition at the Daniels Gallery, New York, in 1965, and the following year Dwan Gallery, New York, mounted the first in a series of solo exhibitions. He participated in several significant group exhibitions of Minimalist and Conceptual art during the late 1960s and early 1970s, including Primary Structures at the Jewish Museum, New York, in 1966, and When Attitudes Become Form at the Kunsthalle Bern, Switzerland, in 1969. His renowned text “Paragraphs on Conceptual Art” was published in 1967. LeWitt’s work was included in Documentas (1977 and 1982) in Kassel, as well as the Skulptur Projekte (1987) in Münster and the Istanbul Biennial (1989). Major retrospectives of his works were organized by the Museum of Modern Art in New York in 1978, and the San Francisco Museum of Modern Art in 2000. Drawing Series . . . , a presentation of LeWitt’s early wall drawings, was installed at Dia:Beacon in Beacon, New York, in 2006–18. LeWitt died in 2007 in New York. A retrospective of over one hundred wall drawings from 1969 to 2007 opened at the Massachusetts Museum of Contemporary Art in 2008 and will remain on view for twenty-five years.