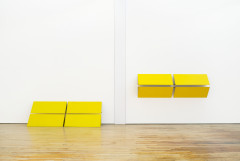 09/03/2019 14:00 09/03/2019 23:45 Europe/London Rita McBride and Ulrich Lehmann on Charlotte Posenenske Event DetailsSaturday, March 9, 2019, 2 pm Dia:Beacon3 Beekman StreetBeacon, New York Free with museum admission. No reservations required. Rita McBride was born in Des Moines in 1960. She currently lives and works in Düsseldorf, Germany, and Los Angeles. She received a BA from Bard College in Annandale-on-Hudson, New York, and an MFA from the California Institute of the Arts in Valencia. In 1988 she began to explore architectural and sculptural form in works ranging from small-scale objects to large-scale commissions. Her major public works include Obelisk of Tutankhamun in Cologne, Germany (2017), Bells and Whistles at the New School in New York (2014), and Mae West in Munich, Germany (2011). In 2017 Dia Art Foundation commissioned a sculptural intervention with lasers, Particulates, which was on view at Dia:Chelsea in New York City through 2018. McBride’s contribution to the exhibition catalogue Charlotte Posenenske: Work in Progress explores her own interest in progressive assembly and industrial logistics in relationship to Posenenske’s pioneering practice. Ulrich Lehmann studied philosophy, sociology, and art history in Frankfurt, Paris, and London. His research interests include the histories of ideas and material culture in late 18th-century and early 19th-century Europe, and the materiality, meaning, and praxis of contemporary design. He has contributed to a wide range of journals and edited collections on art, design, and material culture; his books include Josiah McElheny: Interactions of the Abstract Body (2014) and Tigersprung: Fashion in Modernity (2000). Lehmann is an associate professor in design practice and theory at Parsons School of Design in New York City, where he teaches studio practice and cultural histories. One of these courses, on the concept of prototyping, featured Rita McBride, whose expansive 2014 sculpture Bells and Whistles is installed at the New School.     Dia Beacon FALSE DD/MM/YYYY Rita McBride and Ulrich Lehmann on Charlotte Posenenske