On view in these galleries are five of Robert Smithson’s indoor earthworks from the late 1960s, made with materials such as sand, gravel, mirrors, and glass. Deeply informed by science in its popularized forms—such as science fiction literature and cinema, encyclopedic collections, and natural history museums—his practice addresses processes of accumulation, displacement, and entropy in order to reveal the contradictions in our visible world.

Smithson focused his short but influential career on a reconsideration of sculpture in relation to nature. He began his career as a painter but in the mid-1960s started experimenting with different media including sculpture, writing, drawing, film, and eventually, earthworks. Sometimes the results were fleeting documentations, other times permanent, large-scale sculptural interventions—as in the case of Spiral Jetty (1970), the iconic earthwork maintained by Dia on the northeastern shore of Great Salt Lake, Utah.

Robert Smithson focused his short but influential career on a reconsideration of the nature of sculpture—or, rather, of sculpture in relation to nature. Created during a brief period from the mid-1960s to the early 1970s, Smithson’s provocative works spanned a variety of sites beyond the museum and gallery, from magazine pages to abandoned industrial and natural wastelands. Deeply informed by science in its popularized forms (such as science fiction literature and cinema, encyclopedic collections, even natural history museums), his art focuses on processes of accumulation, displacement, and entropy in order to reveal the contradictions in our visible world.

In his first mature works, Smithson used crystalline formations and structures as symbolic models for the composition of his sculptures. One example is Untitled (1966), a modular, composite volume that incorporates opaque and reflective surfaces. The cross-shaped whole, which consists of organically merged cubes, conjures a deliberately static, yet paradoxical, volume: as the structure seems to expand, its consistency is undermined by the mirroring surfaces on its sides. As part of a series of stepped pieces, each module results from the application of a simple mathematical principle to create a contrapuntal system, literal and symbolic, dynamic and still.

“A crystal,” observed Smithson, “can be mapped out.” In fact, the study of crystallography led him to the formulation of the concept of Nonsite as a physical synthesis of the map and the mapped, or, as he put it, “a container within another container—the room.” Technically, he defined the Nonsite as “an indoor Earthwork,” an elusive “three-dimensional map of a site.” “Instead of putting a work of art on some land, some land is put into the work of art. Between the site and the Nonsite one may lapse into places of little organization and no direction.” Some remarkable examples related to Smithson’s Nonsites may be found in this gallery. Gravel Mirrors with Cracks and Dust (1968), for instance, contains gravel collected at Bergen Hill, New Jersey. The piece incorporates six pairs of mirrors that occupy the junction of floor and wall, with piles of gravel dropped on them with the intention of cracking the glass. The reflections create the illusion that the work exists in and encompasses an expansive space. Symmetrically duplicated by the mirrors, the fissures of cracked glass together with the dust from the gravel mar the pristine reflective surfaces, further complicating the multifaceted interplay of materiality and illusion, presence and absence. Two related sculptures, made one year later, also incorporate mirrors and loosely assembled raw material—Closed Mirror Square (Cayuga Salt Mine Project) (1969) and Leaning Mirror (1969).

“I like landscapes that suggest prehistory,” said Smithson. The countless fragments of shattered glass that form Map of Broken Glass (Atlantis) (1969) are layered both literally and figuratively. As the title implies, the sculpture is to be seen not simply as a pile of sharp, transparent fragments but also as a map of a
legendary lost continent. “It is a shimmering collapse of decreated sharpness . . . arrested by the friction of stability.” Similar to other fictive territories, Map of Broken Glass foreshadows Smithson’s most ambitious realization: a spiral-shaped artificial peninsula made out of mud, salt crystals, and basalt
rocks named Spiral Jetty, which he built in the Great Salt Lake, Utah, in 1970. 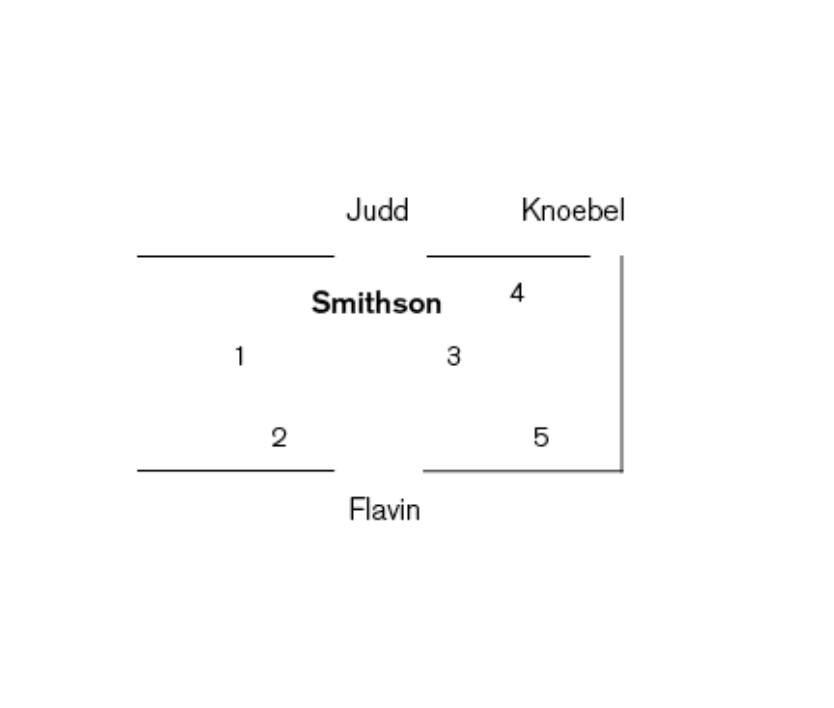 Robert Smithson was born in Passaic, New Jersey, in 1938. In 1953, as a high-school student, he won a scholarship to the Art Students League of New York, where he studied in the evenings for the next two years, also taking classes at the Brooklyn Museum Art School in 1956. Smithson’s first solo exhibition was in 1959, at the Artists Gallery, New York. In 1964, he began to produce what he considered his first mature works of writing and sculpture. In 1973, Smithson died in a plane crash in Amarillo, Texas, while working on the earthwork Amarillo Ramp. Major retrospectives of his work have been organized by the Herbert F. Johnson Museum of Art, Cornell University, Ithaca, New York (1980); the National Museum of Contemporary Art, Oslo (1999); and the Museum of Contemporary Art, Los Angeles (2004). Recent solo exhibitions of his work were held at the Dallas Museum of Art (2013–14) and the Montclair Art Museum, New Jersey (2014). In 1999, through the generosity of the artist Nancy Holt, Smithson’s widow, and the Estate of Robert Smithson, the artist’s work Spiral Jetty (1970), located at Rozel Point peninsula on Great Salt Lake, Utah, was donated to Dia Art Foundation.

This comprehensive publication considers Smithson's sculpture Spiral Jetty in relation to its eponymous companions—a text work and a film.