Since the early 1970s, Louise Lawler has created works that expose the economic and social conditions that affect the reception of art. Lawler’s work directs attention to positions of artistic authority and upends the presentation strategies that shape an encounter with an artwork.

In 1972 Lawler developed a series of high-pitched sounds derived from the names of famous male artists, all of whom came to prominence in the 1960s, and many of whom are represented in Dia’s collection. Birdcalls (1972/1981) is a recording of Lawler reciting these translated names, mixed by composer Terry Wilson. For this presentation at Dia Beacon, Lawler installed the audio recording outdoors in the west garden along the Hudson River, and the text panel of names at the exit leading to the garden.

Since the early 1970s, Louise Lawler has created works that expose the economic and social conditions that affect the reception of art. Lawler’s work directs attention to positions of artistic authority and upends the presentation strategies that shape one’s encounter of an artwork. Her early projects, which appropriated other artists’ works and investigated the boundaries between private and public, established strategies she has continued to use throughout her career.

In the winter of 1970, Lawler was recruited to assist several artists for Willoughby Sharp’s Projects: Pier 18, a group exhibition that occupied an abandoned pier along the Hudson River on the west side of Lower Manhattan. The absence of female artists among the twenty-seven commissioned to create ephemeral interventions and actions in situ did not escape Lawler. By her own account, “the women involved were doing tons of work, but the work being shown was only by male artists.” While walking down the street after leaving the piers one evening, Lawler and her artist friend Martha Kite began to sing loudly off-key to ward off any unwanted interactions, which led to their mimicking bird-like sounds to chant “Willoughby Willoughby.” This parody led Lawler to compose a list of famous male artists, all of whom came to prominence in the 1960s. Not surprisingly, many of them are represented in Dia’s collection, including Joseph Beuys, Donald Judd, Sol LeWitt, Gerhard Richter, Andy Warhol, and Lawrence Weiner. For each artist, Lawler created a distinct birdcall sound of their first or last names, and occasionally used both. This list of canonical names was developed as both an antagonistic and instinctual response to the privileging of male artists at the time, who she felt were being granted positions of authority based on name recognition. Speaking on what she views as art history’s adoration of biography, Lawler explained, “This question of name recognition relates to my feelings about interviews, to the credibility that is given to a statement because of who is speaking.”

In 1981, Lawler decided to make an audiotape recording of her reading the scripted list of artists. Recorded and mixed by composer Terry Wilson, the work was titled Birdcalls and dated 1972/1981 to mark the two occasions of the work’s development. Birdcalls was first installed as part of the group exhibition A Pierre et Marie: Une exposition en travaux (To Peter and Mary: An Exhibition in Progress) that took place from 1982 to 1984 in an abandoned old church in Paris. From this first iteration, where Lawler installed the work herself, Birdcalls was conceived as consisting of the audio piece and the accompanying list of artists’ names displayed in the space where the work is presented.

For the presentation at Dia:Beacon, Lawler installed the audio recording outdoors in the west garden along the Hudson River and the text panel of names at the exit leading to the garden. Birdcalls encourages the viewer to consider the boundaries between artwork and context, to consider the fixed conditions that influence an artwork’s meaning and value. 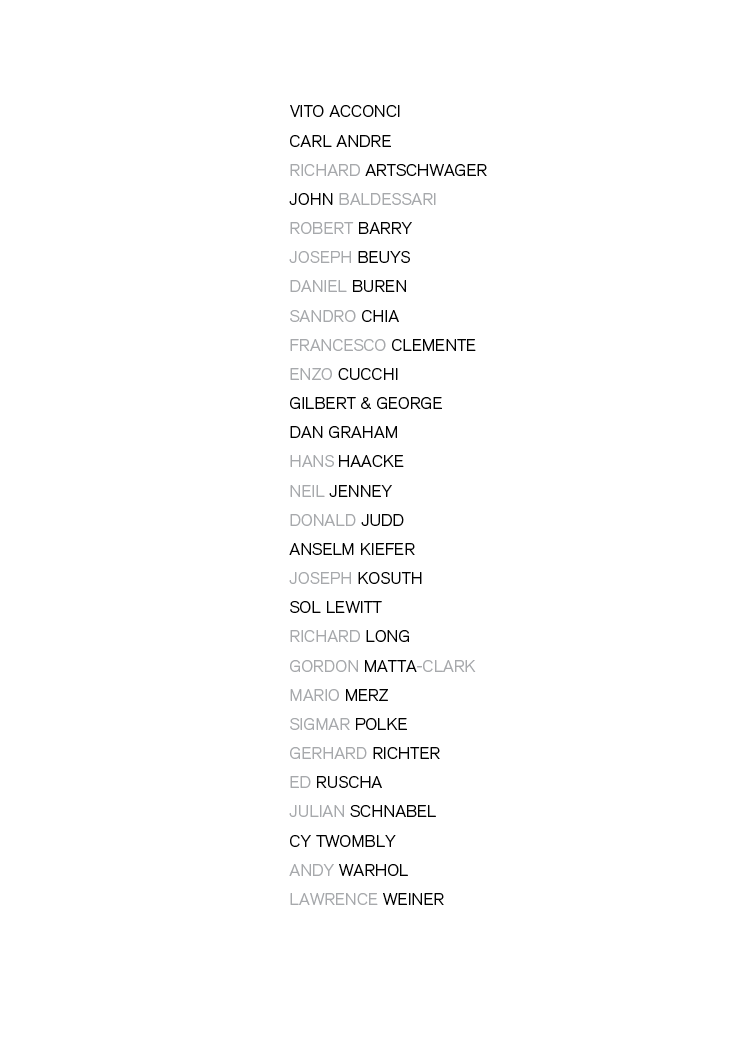 Louise Lawler was born in 1947 in Bronxville, New York. Lawler received her BFA in art from Cornell University, New York, in 1969, and moved to New York City in 1970. Lawler held her first gallery show at Metro Pictures, New York, in 1982. Soon after, Lawler gained international recognition for her photographic and installation-based projects. Her work has been featured in numerous international exhibitions, including Documenta 12, Kassel, Germany (2007); the Whitney Biennial, New York (1991, 2000, and 2008); and the Triennale di Milano (1999). Solo exhibitions of her work have been organized at Portikus, Frankfurt (2003); the Museum für Gegenwartskunst, Basel, Switzerland (2004); the Wexner Center for the Arts, Ohio (2006); and Museum Ludwig, Germany (2013). In 2005, the solo exhibition In and Out of Place: Louise Lawler and Andy Warhol was presented at Dia:Beacon, which comprised a selection of photographs taken by Lawler, all of which include works by Warhol. She lives and works in New York City.

Louise Lawler was born in Bronxville, New York, in 1947. She lives and works in New York City.