On view in these galleries is a focused presentation of Donald Judd’s iconic plywood works from the 1970s, which exemplify the artist’s ability to produce exquisitely complex works by combining essential geometry and common industrial materials. Starting in the 1960s Judd determined a basic vocabulary of materials and forms that he would use throughout his practice, placing simple geometric boxes directly on the floor or spaced evenly along the wall. In forgoing the pedestal, he engages viewers in a bodily experience that happens in real time and space. Judd rejected traditional notions of craftsmanship in favor of an industrial production more true to the nature of his materials, delegating the fabrication of his objects to specialized technicians who followed instructions and sketches provided by the artist.

Early in his career Donald Judd determined a basic vocabulary of materials and forms that he would use throughout his career. He was interested in developing an aesthetic free from any historical or metaphorical associations; he therefore identified and deployed new industrial materials—such as anodized aluminum, Plexiglas, and plywood—that had no precedent in the visual arts. He used these to construct cubes, rectangular pipes, and square planes. Rejecting traditional notions of craftsmanship in favor of an industrial production truer to the nature of these materials, Judd delegated the fabrication of his objects to specialized technicians who followed instructions and sketches provided by the artist.

In the 1960s Judd began placing his fabricated geometric boxes directly on the floor or spacing them evenly along the wall. In forgoing the pedestal, he engaged viewers in a bodily experience. Within a decade he began exploring the contingencies of space and the parameters of perception on broader terms, creating plywood installations whose dimensions were adapted to their settings. For a 1974 exhibition at the Lisson Gallery in London, for example, he created two installations that extended end to end between two existing walls. Each consisted of an extruded rectangle with one slightly altered plane. In the case of Untitled (1974), the upper horizontal plane is elevated by a recessed support so that it appears to hover above the rest of the structure. (Although the object was discarded after the Lisson show, Judd later authorized a new version adapted for the larger exhibition space of the Museum of Contemporary Art, Los Angeles, in 1983.) After the 1974 exhibition, Judd continued to explore formal variability in a series of fifteen untitled plywood boxes made in 1976, each measuring three feet tall and five feet wide. These exemplify his ability to produce diverse sensations of volume and space by combining essential geometry and common industrial materials. At first glance, the viewer recognizes that while the dimensions of every box are identical, each object is unique. The top of one is recessed; another’s sides are angled toward its interior; the lid of yet another box appears suspended.

The artist continued to pursue the contingencies of space in 1976 with the related Untitled, a work that slowly reveals itself as it is approached. As the viewer nears, an upright plywood wall gives way to a sloping plane, which divides the gallery into two inaccessible volumes. The secant angle shifts according to the width of the wooden barrier. While resolutely abstract, this work is emblematic of Judd’s belief that “actual space is intrinsically more powerful and specific than paint on a flat surface.”

Judd’s complicated relationship to painting is evident in his many wall-mounted structures and his persistent use of color. Rejecting the proscriptions of both painting and sculpture, he focused instead on three-dimensional objects that, he argued, “can have any relation to the wall, floor, ceiling, room, rooms, or exterior or none at all.” Untitled (1991) consists of a series of wall-mounted plywood boxes projecting into space. In an attempt to avoid external references, he arranged these structures in nonhierarchical order using a simple grid. Further rejecting the illusionism of painting, he incorporated color into the series through the use of Plexiglas, a material that assimilates hue as an inherent rather than superficial quality.

Originally fabricated for an exhibition at Paula Cooper Gallery in New York City, Untitled (1976), like Untitled (1974), should conform to the dimensions of each new site. While Judd envisioned these and related sculptures as adaptable and contingent, he also valued precise craftsmanship. When an object was built to his exact specifications by his preferred fabricators he often chose to keep rather than discard the construction. Both of these works are from previous fabrications that Judd chose to preserve, but which he nonetheless felt could be contracted or expanded to the proportions of a particular gallery, according to the limits of the work’s existing dimensions. These works thus occupy a complicated position between site-specific installation and discrete object.

Donald Judd was born in Excelsior Springs, Missouri, in 1928. He attended Columbia University, New York City, studying philosophy from 1949 to 1953 and art history with Meyer Schapiro from 1957 to 1962. At the same time that he launched an impressive career as an art critic and polemicist, he began to produce his earliest paintings. He had forged his mature aesthetic by 1965. The Whitney Museum of American Art, New York, organized a retrospective in 1968, and a one-person exhibition was shown at the National Gallery of Canada, Ottawa, in 1975. In 1986 a permanent installation of his work opened at the Chinati Foundation in Marfa, Texas. During his lifetime, Judd received a Guggenheim Fellowship in 1968 and a Skowhegan Medal for Sculpture in 1987. Judd died in New York in 1994. 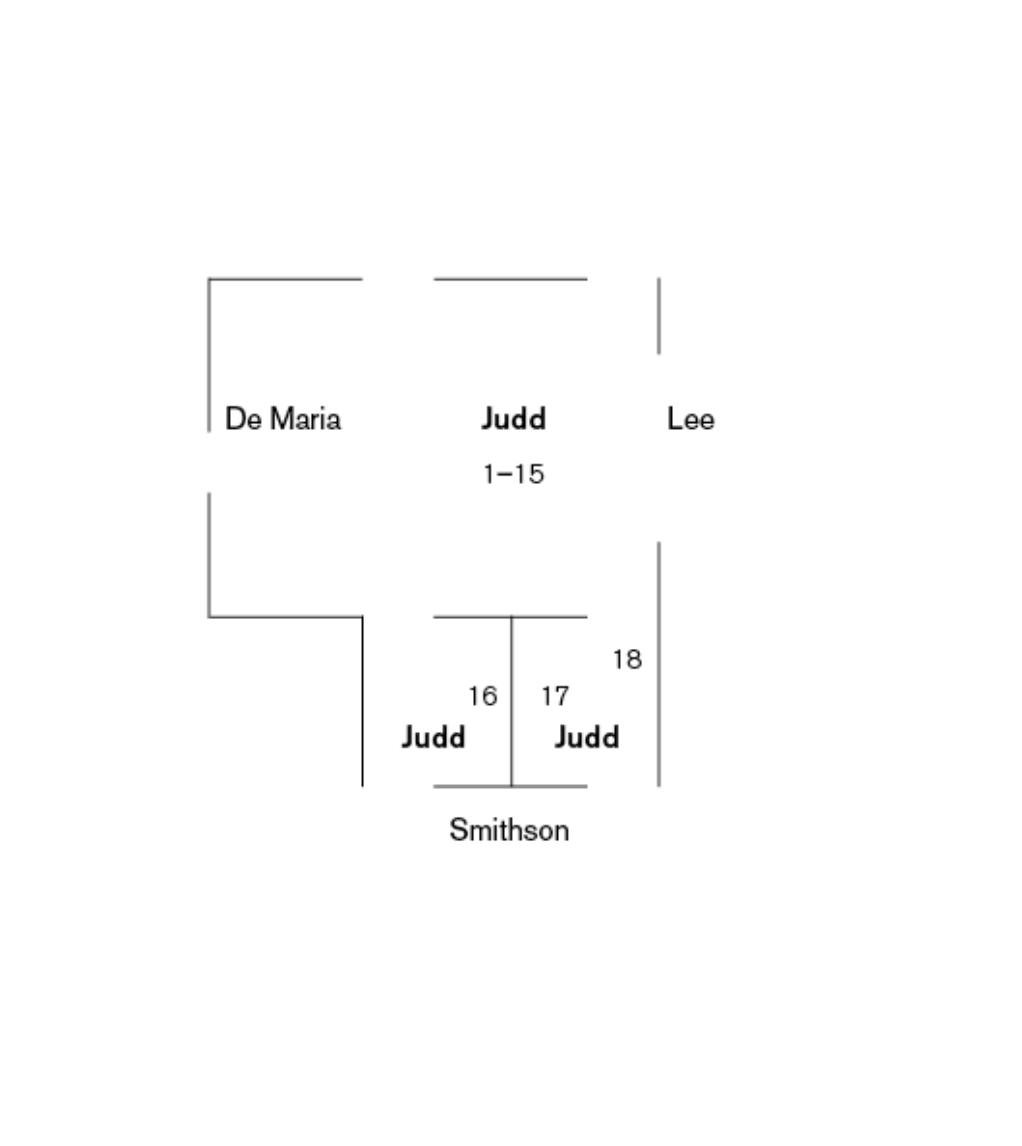